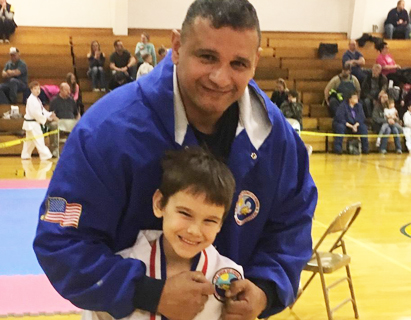 Master Sanchez was born in Bronx, New York, on September 30, 1969. His parents, Carmen Moya and Miguel Sanchez, are naturally from Puerto Rico. Miguel Sanchez, his father, served in the USA Army.

In 1977, Master Sanchez moved to the big city of San Juan, Puerto Rico. In 1979, he started training in the Martial Arts. His first style, Karate Kyokushin, was one of the strongest styles of Karate. Kyokushin was founded by Mas Oyama, and taught to Sanchez by Master Adrian Becerril, Grand master Vincente Guzman and Grand Master Kenny Morales.

Sanchez has also trained in Karate, Jujitsu, Tae Kwon Do, Hapkido, and kick boxing. In the early 80’s he started training with Tae Kwon Do in New York, with William Martinez. Sanchez returned to Puerto Rico and trained with Jose Santos and his real Master, Luis F. Rivera. Rivera has a Master’s Degree in Hapkido. He also was one of the original people who brought TKD Chung Do Kwan to Puerto Rico.